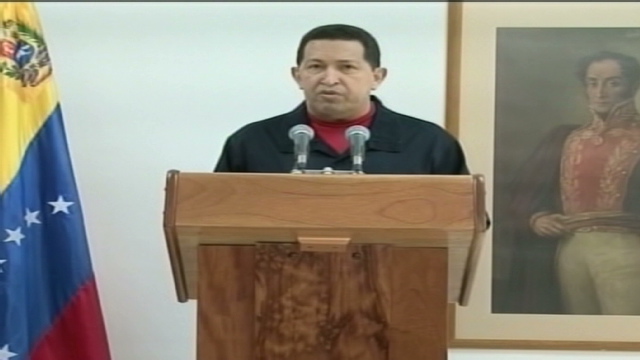 (CNN) -- With no heir-apparent to Venezuela's presidency waiting in the wings, politicians are jockeying for power as President Hugo Chavez undergoes medical treatment in Cuba, analysts said.

The Venezuelan leader has kept a notably low profile in the nearly three weeks since officials first announced that doctors operated on him, sparking rampant speculation about his health and the country's political future.

His revelation Thursday night that doctors in Cuba had removed a cancerous tumor is likely to further fuel dissent in the ranks of Chavez's supporters, one former Venezuelan official said.

"The main conflicts are inside the Chavez forces, with different factions, over who is going to be the successor," said Moises Naim, a former Venezuelan trade minister who is a senior associate at the Carnegie Endowment for International Peace.

Chavez said Thursday night that he had remained in close contact with Venezuelan leaders and continued to command the country's government from Havana. He said he was still undergoing treatment, adding that his condition was "evolving satisfactorily."

"There is no time for sadness, but time for reflection, for courage and for work," he said, standing beside a group of government ministers.

But some analysts said Chavez's illness has already transformed the public's perception of his government, no matter how his treatment proceeds.

"Here's a guy who was the strongman, and this has exposed some real frailty," Inter-American Dialogue President Michael Shifter said before Chavez's speech. "Even if he's recovered and comes back, this still showed that he's mortal."

Chavez said Thursday night that he was continuing treatment in Cuba, but did not specify what that treatment entailed, where the cancerous tumor was located or when he would return to Venezuela.

Naim said the small amount of information Chavez released in his speech could have a large political impact.

"He has cancer. He has more treatment. ... So the notion that we have Chavez for an almost indefinite period is no longer a reality," Naim said. "The notion of a Venezuela without Chavez is now in the minds of millions of people that never imagined it."

But until recently, few had considered the possibility that Chavez would leave office, Shifter said.

"There's no plan for succession," he said. "This is not something that's been considered or discussed."

Larry Birns, director of the Council on Hemispheric Affairs, said before Chavez's speech that it would be difficult to transfer the Venezuelan leader's authority to another leader.

"What we're talking about is a government that has been personalized around Chavez," he said.

In recent days, analysts say it appears that the president's brother, Adan Chavez, has tried to position himself as next in line for the country's top job.

"It would be unforgivable to limit ourselves to only the electoral and not see other forms of struggle, including armed struggle," Adan Chavez reportedly said Sunday -- citing Latin American revolutionary Che Guevara -- in remarks widely quoted in Venezuelan media.

"That made it sound as if (Hugo) Chavez might be seriously ill," Susan Kaufman Purcell, director of the Center for Hemispheric Policy at the University of Miami, told CNN before Chavez's speech. "If so, the starting gun for who's going to succeed him just went off."

But Purcell noted that there is "no heir-apparent" to Chavez.

"Nobody has the personality and the charisma that seems to be effective at winning support, principally among the many poor people in Venezuela," she said.

"This also has a big impact on the opposition, which realizes for the first time that Chavez might not necessarily be there forever, which will change their strategies and their calculations as well," she added.

Chavez's speech Thursday was the most specific information released about his health in recent weeks -- and the first official indication that doctors had detected cancer.

Speculation about Chavez's medical condition surged in media reports and online posts since officials announced that doctors in Cuba performed emergency surgery on Chavez to treat a pelvic abscess June 10.

Most official reports since Chavez's surgery summed up the situation with the same phrase, saying Chavez was "recuperating satisfactorily" in Cuba.

Last week, unnamed U.S. intelligence sources told El Nuevo Herald -- the Spanish-language sister paper of the Miami Herald -- that Chavez was in critical condition. Reports from other media, including The Wall Street Journal, raised the question of whether Chavez has prostate cancer.

"The only thing that has metastasized is the cancer of the Miami Herald and the rest of the right-wing media," he said.